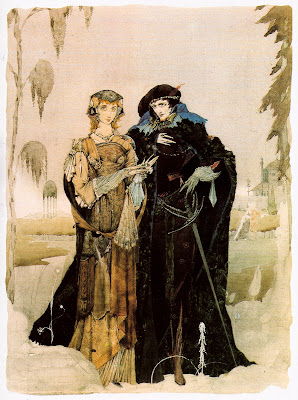 Above is an unfinished, and unpublished, illustration depicting Faust and Margaret from the 'Garden' scene in Faust. The watercolour is by Harry Clarke (1889-1931), an illustrator who was, first and foremost, a stained-glass artist. The Ireland-born Clarke owes much to Byzantium in style, and something to Beardsley in tone. Clarke began work on the project in late 1924. Initially Harraps, the publisher, did not like the drawings (Clarke recalled that they thought the work was 'full of steaming horrors'), and many of the illustrations were finished under pressure. 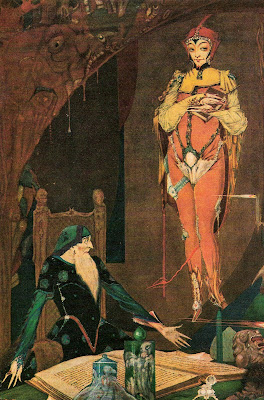 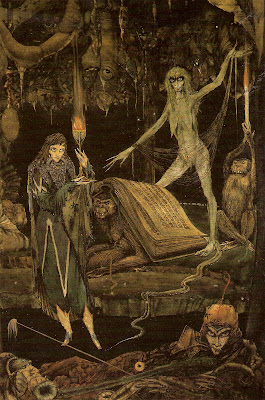 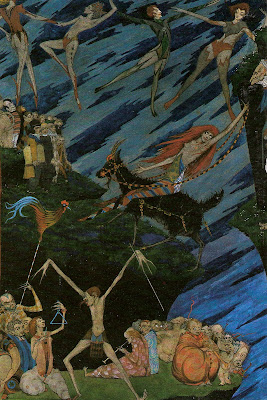 'There is from first to last in these pictures no sunlight, but rather light filtered, coming as through a glass darkly. And it is this quality of filtered light, helping to make him so interesting a commentator on Goeth's tale, that is one of the distinctive charms of Mr. Clarke's work. It is not for nothing that he is by choice a designer of storied windows richly dight, and in the case of these Faust pictures, the dimmed light is truly religious, binding together as in a single medium this wealth of fantastic invention and remaining in the mind until the detail is lost in the whole' - Dorothy Richardson for The Studio, October 1926 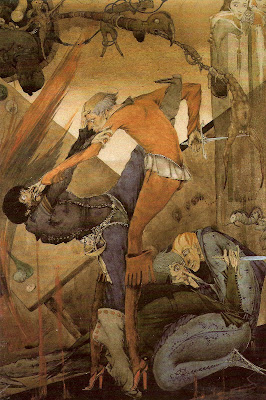 'Nothing in these drawings represents anything in the visible world: all come from that dread mid-world of purgatory or the soul where forms change on the instant by evil or beautiful imagination... Clarke's fertility of of invention is endless. It is shown in a multitude of designs less elaborate than the page plates, but no less intense. How awful... is the Despair with head like a bird of prey, which holds the fainting girl in the Cathedral, while the choir chants the Dies Irae... Clarke is not the artist of men and women, but seer of forms which their passions and imaginations assume' - Irish Statesman 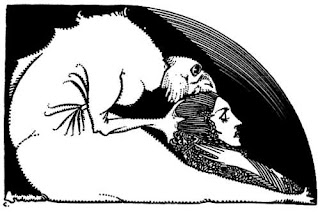 A negative review of the drawings actually sums up what I love about Clarke's take on the poem:
'... a dream world of half-created fantasies; the powerless fancies of senile visions; misshapen bodies with wormlike heads; staring eyes of octopuses and reptiles gaze like ponderous saurians of the lost world, while half-finished homuncili change like 'plasma' in forms unbound by reason' - Artwork 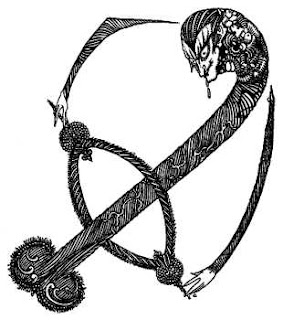 For more of Clarke's Faust illustrations see nocloo.com and Grandma's Graphics. Much of the information in this post was taken from Nicola Gordon Bowe's excellent book The Life and Work of Harry Clarke (1989). 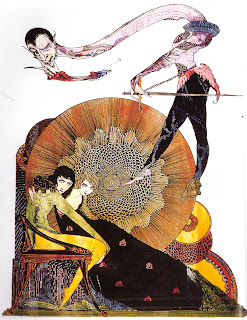