I recently went to the exhibition 'Against Nature' at the Henry Moore Institute in Leeds. The focus of the exhibition is sculpture as a medium for the depiction of metamorphoses and transformations - many of them merging animals and humans in a manner evoking classical sculpture. Read about the exhibition here.

However, the first artist I thought of when at the exhibition was Heinrich Kley, who is known mostly through his influence on animation. Kley's most famous subjects were legendary creatures such as centaurs, trolls and demons - his sketches were the direct inspiration for many of the sequences we see in Fantasia. Reflecting the advent of the factory age in which they were drawn, Kley's sketches also refer to smoke belching factories and industrial subjects. I've posted a selection of my favorite Kley drawings below; those with captions have them below the image. Apologies for some of the shadows in these scans. 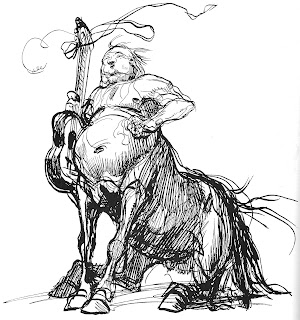 And why shouldn't I play the guitar?

Sure I play the guitar, now all the more! 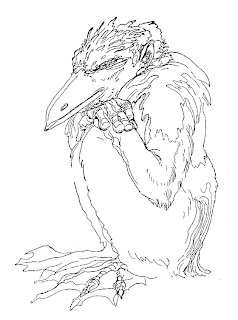 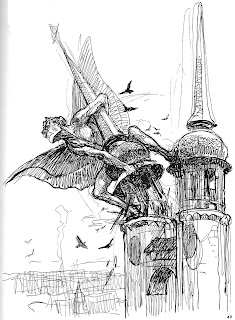 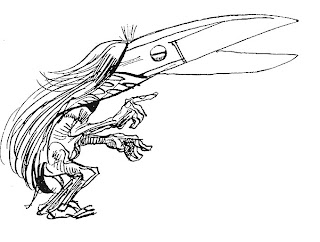 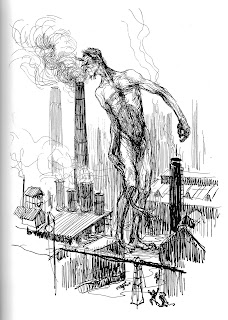 What a devilish stench! 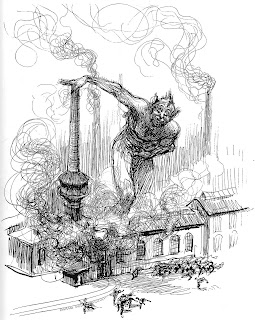 Sabotage
This leads me on rather neatly to Albert Hurter, a Disney 'inspirational sketch artist' who was profoundly influenced by Kley. Hurter was payed to sketch all day; his drawings were used as the inspiration for Disney's animators. His subjects included animals and anthropomorphism; most interesting to me, though, are his drawings of inanimate objects given life and personality. 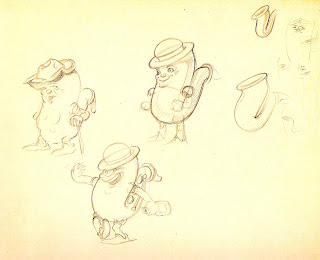 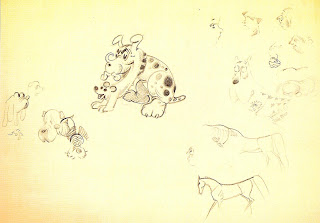 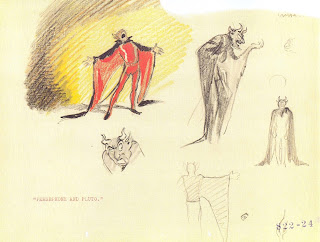 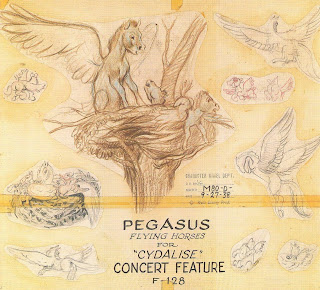 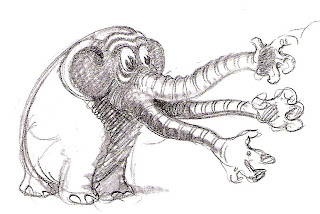 Fans of Hurter may be interested in John Canemaker's Before the Animation Begins, which provides a detailed account of the lives of inspirational sketch artists to work at the Disney studio, along with a selection of the work they produced while there. Another book on Hurter is He Drew As He Pleased, a book consisting almost entirely of sketches made by Hurter at the Disney studio. It's a wonderful book, but, printed in the 1940s, is now rather expensive; for samples of He Drew As He Pleased visit Brad Goodchild's blog.
To finish off, here are the Chats Fourres, or Law-Cats, from Francis Rabelais' Gargantua and Pantagruel. The Law-Cats are cat-like creatures that symbolise judges and lawyers, and 'live on corruption'. Below are depictions by Gustave Dore (the first four images) and W. Heath Robinson (the fifth and sixth images). 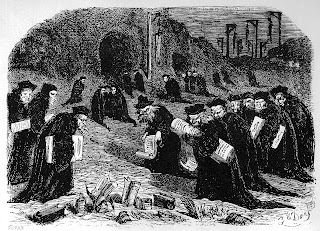 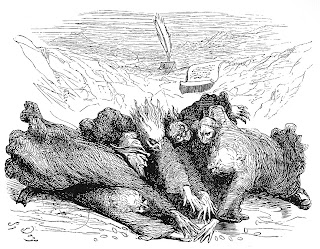 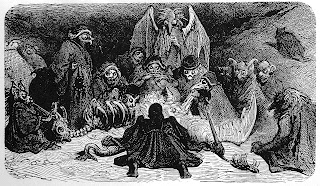 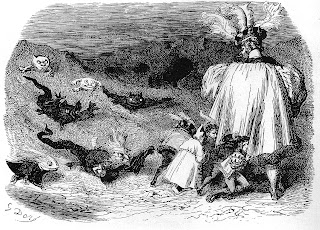 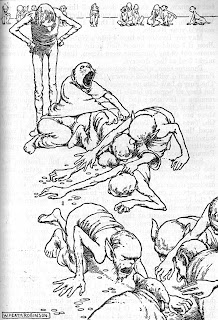 Every so often there are attempts to list animated films in order of 'greatness'. A very difficult thing, because, it seems to me, 'greatest' is rather a vague adjective. Most recently, the American Film Institute will be releasing a list of the '10 Top 10', with animation as one of the genres (wrong for a start: animation isn't a genre), defining worthy films as having critical recognition, awards of some sort, popularity over time, historical significance and cultural impact.

Included on the list of animated film nominations (which can be downloaded from the AFI site for free, though you need to register) are most of the Disney animated features (not including their package features of the 1940s), the Pixar films, a selection from Dreamworks, Warner Brothers and a few others. It will be interesting to see what the final top 10 will be. Of course, only American films can be nominated, which eliminates some of my favorite animated films (Allegro Non Troppo and Belleville Rendezvous are two films of which I am particularly fond).

As far as American animated films are concerned, it is virtually impossible to exclude Disney, who are still responsible for some of the best animated features. My favorite animated film, and probably the film I consider the best animated feature of all, is Pinocchio (an inspirational sketch for the film, by Gustaf Tenggren, can be seen above right; click to see a larger version). Fantasia follows closely behind, as perhaps the most sophisticated and creative of all Disney's films. Through its quality, legacy and cultural impact, Snow White and the Seven Dwarfs (artwork, also by Tenggren, can be seen on the left) ought to be quite high on the list, as should Bambi and Dumbo. After Disney's first five films, my favorite is probably One Hundred and One Dalmatians, a film with a wonderful style, brilliant writing and a cinematic icon in its villainess, Cruella De Vil. It is a film that often seems to me underrated.

A quick search brought up a list of the greatest Disney animated features as voted for by visitors of Disney fan site Ultimate Disney. This list demonstrates a preference for the newer Disney features - which perhaps are the ones that site visitors grew up with - with Beauty and the Beast - nevertheless a very good film and a favorite of mine - topping the list. The most popular of the films made during Walt Disney's lifetime is, perhaps surprisingly, Sleeping Beauty (number 5 on the list), a film which I find to be very impressive but consider ultimately to be an artistic failure. Snow White is reasonably high, but the other four features from what many consider Disney's 'Golden Age' seem surprisingly low on the list. Tarzan, which seems to me the technically best of the newer generation of Disney features, is placed 19th on the list.

Next to Disney, Pixar are probably responsible for America's best animated films. The Toy Story films obviously have had a significant cultural impact, and have a remarkable legacy. For my vote, though, the best are Brad Bird's films, The Incredibles and Ratatouille. The latter seems to be too recent for nomination, as it is not on AFI's list. I agree with Michael Barrier, who once referred to The Incredibles as 'the best of Pixar's six features, and the first computer-animated feature I've seen that gives me hope that the medium may eventually have the same capacity for artistic expression as hand-drawn animation'. Another of Brad Bird's films, The Iron Giant, is another worthy nominee.

I consider Dreamworks (most famous for the Shrek films) to be rather too happy-meal led and pop-culture oriented to be included on the list. The Prince of Egypt, probably the best of Dramworks' animated films, is not even nominated, and, like many of the studio's films, exists very much in the shadow of Disney. It is possible, however, that Shrek will make the list. Though I dislike the design and animation of the film, its enormous popularity and award-winning status may be enough to secure its position - the film is perhaps the most recent of animated hits, and was the second most popular animated film on Channel 4's 100 Greatest Cartoons list. 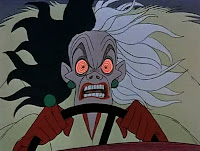 AFI's 10 Top 10 will be broadcast on American channel CBS sometime in June - presumably the site will have the list of winners up at that time as well. In the mean time, Empire Magazine has a feature on the Disney studio and rank the top 10 of all Disney films - live action and animated. Pinocchio tops the list (hooray!), with Ratatouille second, The Jungle Book third, Snow White fourth, The Lion King fifth, Dumbo sixth, Mary Poppins seventh, Bambi eighth, Toy Story ninth and the first Pirates of the Caribbean film tenth. Another magazine, Total Film, also had a list of the 100 favorite movie characters - the only animated characters were Cruella De Vil (hooray again) at 82, Shrek (ahem) at 17 and Andy Serkis' brilliant Gollum at 5.
Posted by Luke Farookhi at 09:26 No comments:

A was an Apple Pie

This bizarre idea sprang from an old nursery rhyme, titled, oddly enough, 'A was an Apple Pie'. The poem goes through every letter of the alphabet, using a word beginning with the right letter to describe what each different character did - B bit it, C cut it, D dealt it and so on. For the final few letters, of course, there's a bit of a compromise.
The earliest illustrations I can find of the poem are by Kate Greenaway, and feature, as the characters, rather cherubic young children in a playground. But what really made me decide to illustrate the rhyme was a series of illustrations by one of my favourite illustrators, Raymond Briggs. His illustrations, like his takes on most nursery rhymes and fairy stories, are wonderfully unconventional - the characters in his version are an odd bunch indeed.
What excited me about doing this was the graphic possibility of actually putting the letters in the characters, so it's not just someone representing B doing the biting, it's B himself. This meant a more graphic style than I was used to. In each of these drawings I tried to integrate the letters into the line and the general form, which meant not thinking about anatomy so much as 'shapes that worked'. In this respect I was greatly influenced by the character designs of Tom Oreb, who I'll post about later. Also an influence on the style used were Al Hirschfeld, Ronald Searle, Kay Nielsen and Aubrey Beardsley.
This is still a work in progress: the hooded figures in some of these drawings were inspired by similar characters populating Goya's Caprichos and the illustrations by Gustave Dore. It was then pointed out to me that, the way I've drawn them, they resemble Muslim veils. Not particularly wanting to be un-PC or offensive, I'm therefore going to change 'B' and 'X,Y,Z and &' (other hooded figures shown here are either obviously hooded as opposed to veiled, or not portrayed in a negative light). A few others will also be changed, simply because they don't 'look' right. Eventually, however, when I'm happy with all the drawings, I'm making them into some sort of book.
Click any image to enlarge, of course.

A was an apple pie

F fought for it

L longed for it

M mourned for it

N nodded at it

P peeped in it

R ran for it