David Hall and Alice in Wonderland 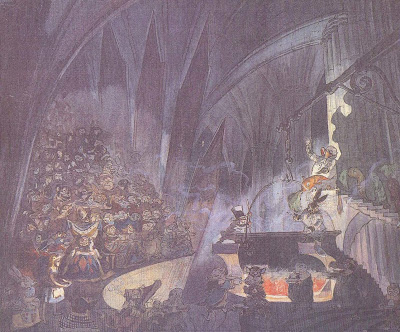 News of the upcoming 'Alice in Wonderland' adaptation from Tim Burton has brought me back to Disney's 1951 animated version. Though not the best Disney film, it is undoubtedly one of the most interesting and probably my favorite of Disney's 50s output - it does not work together cohesively as a whole, but showcases a great deal of imagination as far as style and staging are concerned.

Disney's history with alice began with Walt's own interest in the material, which he claimed was his favorite piece of English literature. Thoughts of a direct adaptation were in his mind as early as 1931, when he purchased the rights to Sir John Tenniel's illustrations.
I fully believe Tenniel must be given as much credit as Lewis Carroll himself for the endurance of Wonderland and Through the Looking Glass and the images the material conjures up. Just as mention of Sherlock Holmes automatically brings to mind the image established largely by illustrator Sidney Paget, so is Tenniel so irremovably linked to the denizens of Carroll's imagination. Though the collaboration was not an easy one - Carroll disapproving of a number of Tenniel's creative decisions - it is extremely difficult to read the text without thinking of these events taking place in the world specifically depicted by the Punch cartoonist.
In 1938, Al Perkins, a story-man at the Disney studio, was appointed to research the material, resulting in a 161-page analysis of the book, suggesting possible approaches to adapting the book. This coincided with the hiring of inspirational sketch artist David Hall, an Irishman who had experience in live-action set design, having worked on, among other films, Cecil B. DeMille's The King of Kings. Hall adapted many of Perkins' ideas into storyboards and inspirational sketches, using a combination of pencil, watercolour and ink. 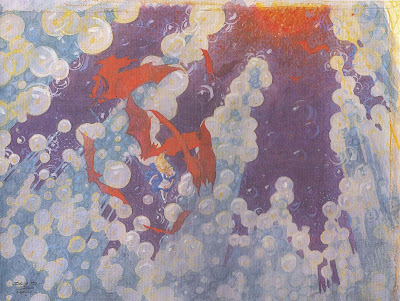 The little that is known of Hall's life is covered in John Canemaker's Before the Animation Begins. Canemaker has compared Hall's inspirational sketches for Alice and Peter Pan to the illustrations of Beatrix Potter (Peter Rabbit) and of Arthur Rackham (who had himself illustrated Alice); however, Hall's work is both less finished and more energetic, with a sense of movement very suitable for Wonderland and its residents.
Hall was ordered to remain faithful to Tenniel. However, while Tenniel's illustrations remain very static - partly a result of the method of reproduction via etching in those days - Hall endows everything with movement more suitable for transition to the big screen. More cinematic too is Hall's approach to scale. Alice's journey down the rabbit-hole is an epic fall through a vast space populated by clouds, gems, ice, bubbles and bats; and the Queen of Hearts' castle is an immense, foreboding fortress silhouetted against an uneasy sky.
Hall's depictions of events at the Queen's Castle and Croquet-Ground are among his most interesting sketches. Used in this post are a mere selection images that can be downloaded from Thad Komorowski's blog; the larger images are from the aforementioned Before the Animation Begins, an edition of Alice in Wonderland abundantly illustrated with Hall's sketches, and the catalogue from the exhibition Il Etait une Fois: Walt Disney. 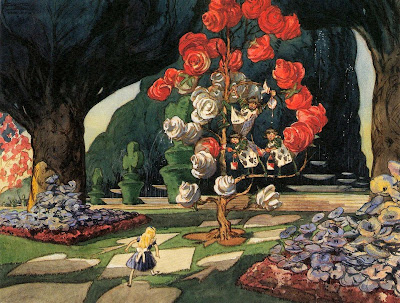 Meanwhile, hoses, watering cans, lawnmowers and shears are busily at work without the aid of gardeners, in a manner somewhat reminiscent of the sketches of fellow inspirational sketch artist Albert Hurter.

Dissatisfied with the volume with which the White Rabbit heralds her arrival, the Queen knocks him out of the way and does it herself. 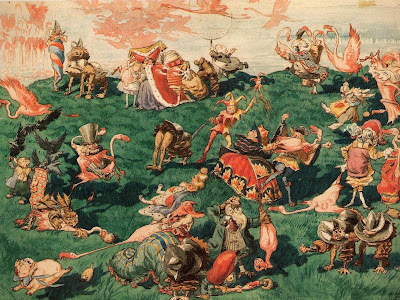 Al Perkins' treatment made several attempts to link the episodic events of the story together. As a result, much of the cast encountered earlier in the film attend the Queen's croquet game. Besides Alice, the Queen, the King (asleep), the Knave, the White Rabbit and the soldiers, this scene also features the Duchess (who does not appear in the final film) and her baby-turned pig, with her frog and fish footmen acting as caddies. The Caterpillar, Hatter, March Hare and Dormouse are also taking part, as are the Dodo and his companions from the Caucus Race earlier in the story. We can also see a fool (presumably a reference to the Joker card) and a figure in a red hood. More on him later. 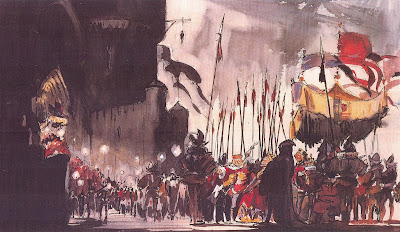 Following the game the party proceeds to the castle, presented here in a long sketch to indicate a pan. I've split the sketch in two here. This is a spectacular scene, full of life and character; however, the castle at left suggests that we are entering a darker part of the story, and the presence of gallows up above, with a corpse hanging from them certainly can't bode well. Indeed, the imagery becomes more and more nightmarish as we progress.

The red hooded figure we saw earlier is apparently the assistant and train-bearer for the executioner, a dark, sinister figure cloaked entirely in black - a far cry from the diminutive, comical figure from the original book and illustrations. 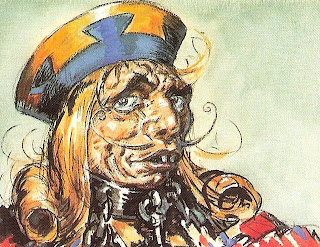 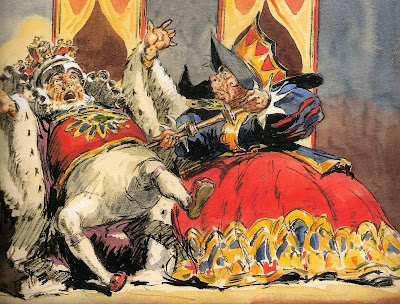 The trial of the Knave of Hearts takes place in a courtroom of tall boxes and long, winding staircases. The Knave himself is in far more chains than necessary to emphasise the cruelty of his oppressors, and the Cheshire Cat is present - first as a headless steward handing out programs, then as a barrister.

From what I can see in the storyboards, the story involved the Knave being done in by some sort of exploding cannon (another Hurter-esque creation). The Queen sentences Alice to be executed, and we enter the film's climax.

The door of the dungeon opens out to a sheer drop. The Queen does not seem to want Alice to go so easily and leads her instead up a spiral staircase to the top of the castle's highest tower. 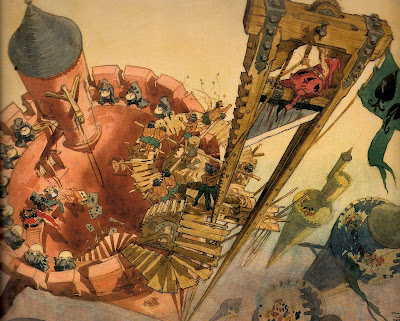 This is perhaps the darkest of all of Hall's inspirational sketches for the film. The Queen and the black-clad executioner lead Alice to the guillotine, which is being prepared by the red henchman. Sinister hooded drummers line the tower's battlements, while more minions, forced on by an overseer, operate the necessary equipment to move the blade of the guillotine, which reaches towards the viewer. Despair is emphasised - the stairs Alice is climbing are transforming into cards and collapsing behind her, leaving her no option but to continue to her death. Nor is there any mode of escape around the guillotine itself, which is surrounded by a sheer drop. Not to be too graphic, but that which is decapitated would simply fall, seemingly to infinity. The other towers scattered about the edges of the frame give the viewer an idea of the vastness of it all.

The ending continues to resemble nightmares in which the dreamer has no choice but to die. Straps tie themselves around Alice as the Queen looks on in anticipation. Taking it a step further the Queen becomes, in a way, the death herald, climbing onto the blade in order that she be able to ride it down as it does its job. She's done this before.

Just as the blade screeches towards Alice, of course...

She escapes the nightmare, the blade lingering a little as everything else transforms into a simple pack of cards swirling about her. The cards eventually become the leaves of the garden she sits in in the 'real world'.

The climax of the 1938 plot for the film would perhaps have made this the most terrifying of Disney features, with its imagery of hanging corpses and guillotines, and a frighteningly bloodthirsty Queen of Hearts. Ultimately the film ended up much lighter, with a greater deal of slapstick and arguably an approach better suited to animation. The Queen was made rather more comical - and, I must say, a thoroughly entertaining character, even though her animator, Frank Thomas, was not satisfied with his work - and we do not follow her victims as they are dragged to the execution block.
Though the film is ultimately kept in the realm of fantasy much more, many viewers find the film scary, not through the danger of death as in the storyboards and sketches shown here, but in the unnerving quality certain aspects of the film, such as the Cheshire Cat, create. It should also be noted that the original book probably wasn't as dark or scary as the likes of American McGee may suggest - just weird and wonderful, and most of the time satyrical. The Queen of Carroll's Wonderland is just as eager to behead, but the majority of those she sentences are pardoned behind her back, and the Gryphon even claims that no-one is executed. Will Burton take the darker or lighter route with the Queen?

For a treasure trove of Hall storyboards, visit Thad Komorowski.
Posted by Luke Farookhi at 15:38

Hi,
I saw your link to my site. Thanks! I am glad that zip file is of some use. I have a lot more artwork from the film I want to display soon. I have a complete set of aborted boards from 1943. I think Barrier was right in his assessment of it being the film Walt felt he had to make more than he wanted to. I think it is my favorite of all the animated features though.

Hello Thad,
Thanks so much for uploading the storyboards. I would definitely be interested in seeing more. It's certainly one of my favorites too. I understand it will be given some sort of special edition DVD treatment to coincide with the release of Burton's version.

hey luke, hows things? I'm running a postal illustration project, im posting exquisite corpses to talented people to complete and i was hoping you'd be up for doing one? just email me your poatal address and i'll send one out to you, my emails steve1hockett@aol.com

This is fantastic stuff. This treatment definitely would have made a terrifying feature. My God, it makes "Pinocchio" look like a Little Golden Book by comparison.

This was a great post. Along with Thad, "Alice in Wonderland" is my favorite of all Disney features. I'm also wondering how Tim Burton will handle the material.